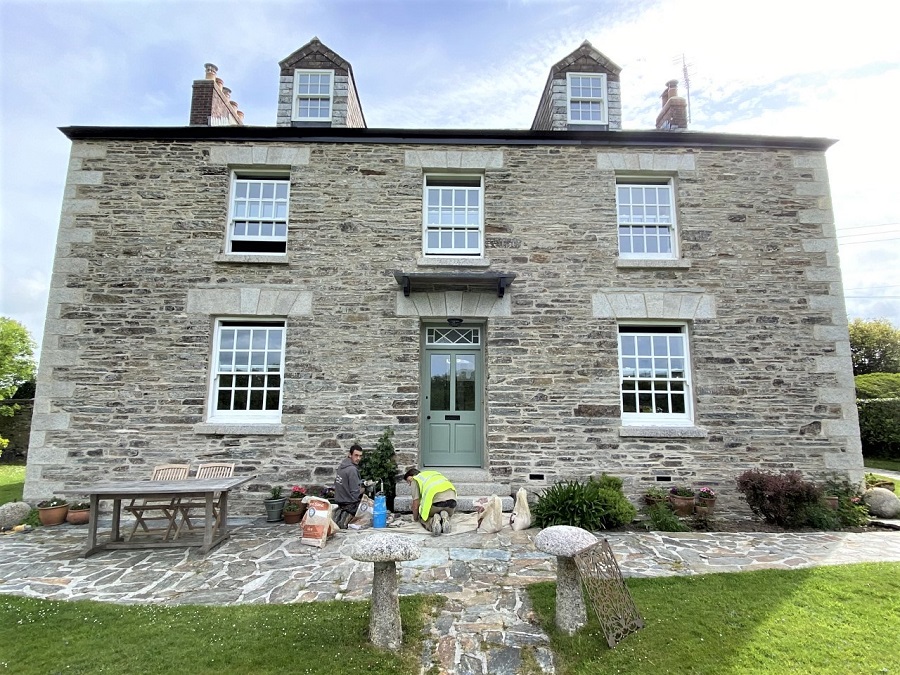 We were recommended to approach Leslie Cornell Building Restoration after a good deal of our house restoration had already been completed. We had had the house re-roofed, electrically re-wired, a central heating system installed and a good deal of general building work completed. The house had suffered from decades of trapped moisture caused through a lack of heat and ventilation but primarily because the original lime mortar, when it had failed years earlier, had been replaced with cement then further exacerbated by the coating of a non-breathable render and white paint. The task of rectifying this problem seemed like a mountain to climb. From our very first meeting with Leslie he patiently listened to our concerns and quickly put us at ease with his passion and knowledge for the skills required in dealing with stone-built properties. We were provided with a detailed costed breakdown of the work phases involved and made certain we understood the processes involved, which add to our confidence that we were in good hands.

The actual work phase was far less daunting than we had imagined, given that the house had to be stripped back to bare stone and all the old cement joints removed before the new lime mortar could be applied. Leslie has instilled a very strong knowledge base and work ethic across his entire team, who were always polite and worked conscientiously throughout the day – they were a joy to have around. Their care, attention to detail and respect shown to our property was a real breath of fresh air. At the end of the day either Leslie, or the senior member of his staff, would ask us to inspect the work completed that day and make certain we were happy with the tidiness of the whole site before leaving.