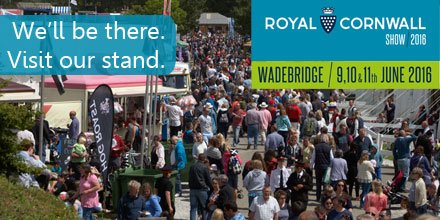 This year’s Royal Cornwall Show saw us build a Cob wall, top it with a thatch roof, mix Cob and make Cob bricks. Whilst we are quite used to trampling Cob and making Cob bricks at the show, building a whole wall was something completely new.

It started the week before the show, just as soon as we were able to access the showground we were there building the plinth (base) for the wall to give it enough time to dry, or cure, before work on the Cob part of the wall could begin in earnest. We used traditional stone, built with cement and pointed with lime. 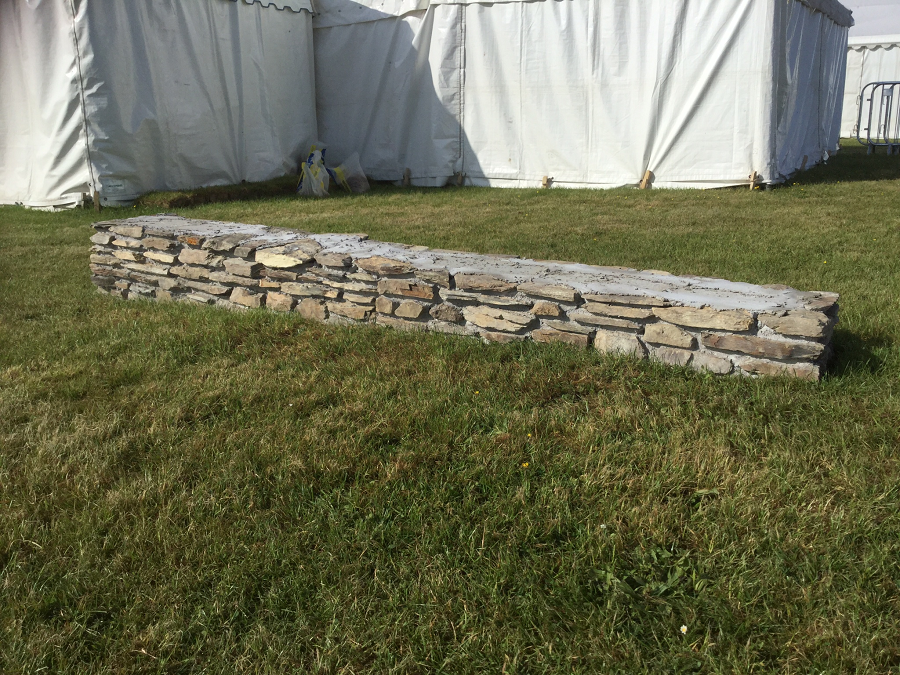 Whilst we were giving the plinth a chance to cure we set up the rest of our stand in the Countryside area which, this year, as in previous years, was very well supported. We were lucky enough to be joined by some other excellent Cornish companies such as The Cornish Lime Company and Christopher Robinson Master Thatcher. 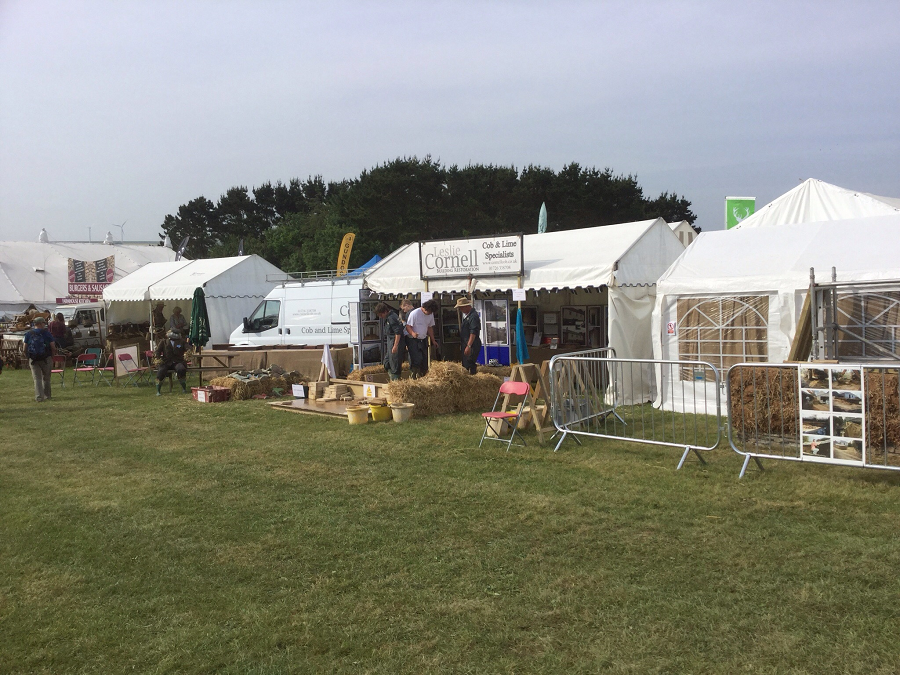 We like to think of our stand as being both fun and educational. We are firm believers that it is imperative that our historic buildings in Cornwall and traditional building methods be kept alive for future generations to enjoy and feel that part of our responsibility for keeping those building methods alive is through education. Heritage Buildings in Cornwall are very important and we would rather restore than rebuild.

We made sure that we had samples of our work, explanations of our methods and, of course, the chance the mix some Cob and to make a Cob brick with our friendly team on hand to help. More on Cab Mixing coming soon. 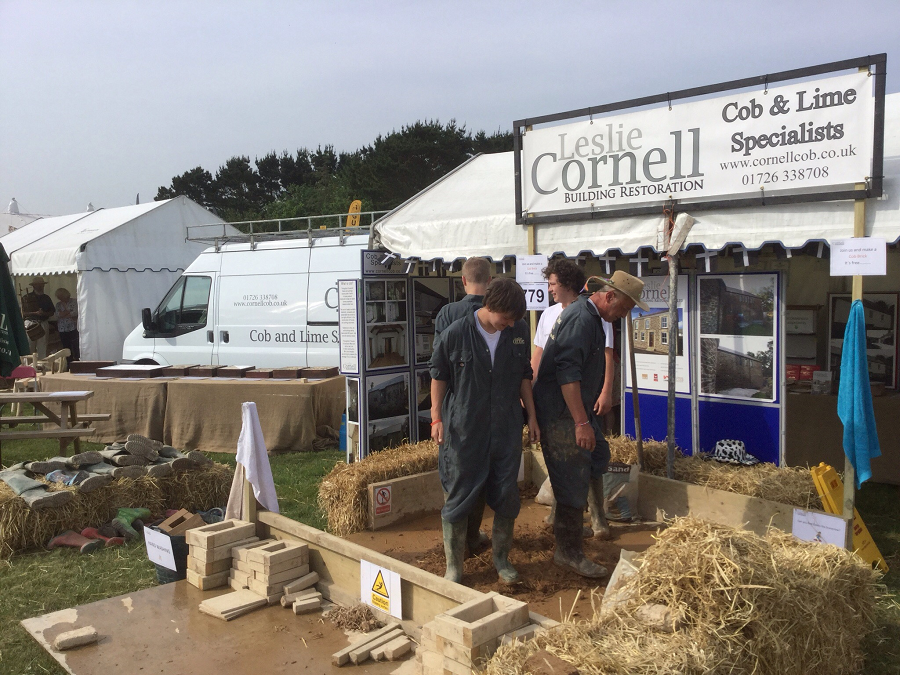 So, back to the wall, which began in earnest as soon as the show opened on Thursday Morning. To see a Cob Wall in Cornwall being built visit our Youtube video here: www.youtube.com it really is fascinating stuff, not at all like building a modern block wall, you may find the method quite surprising. 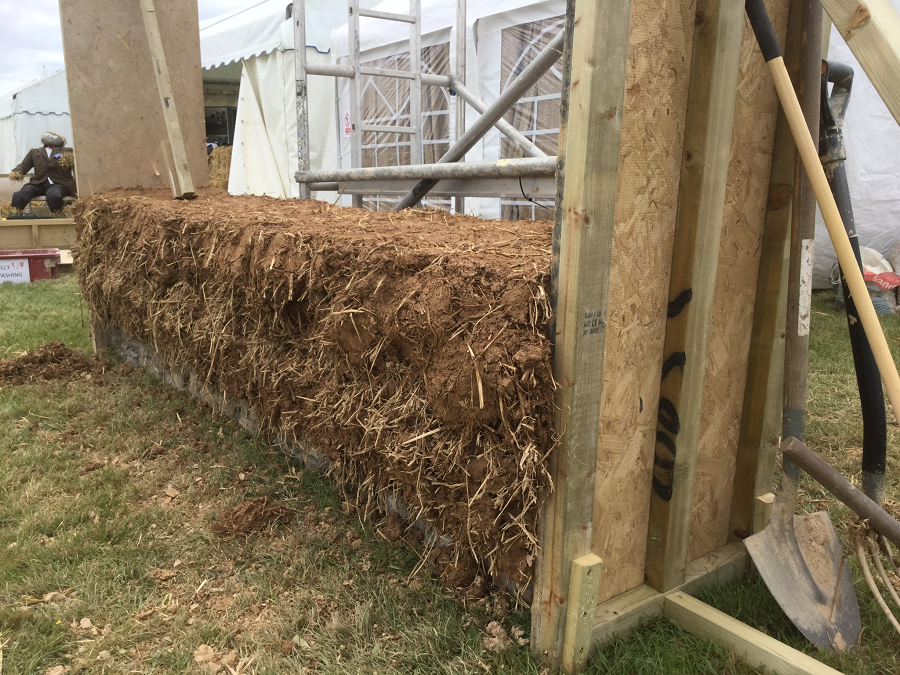 On day two the wall was ready to be pared back using an Adze, a special tool a bit like an axe made with the blade set at a right-angle to the handle to make paring back the tough Cob much easier. 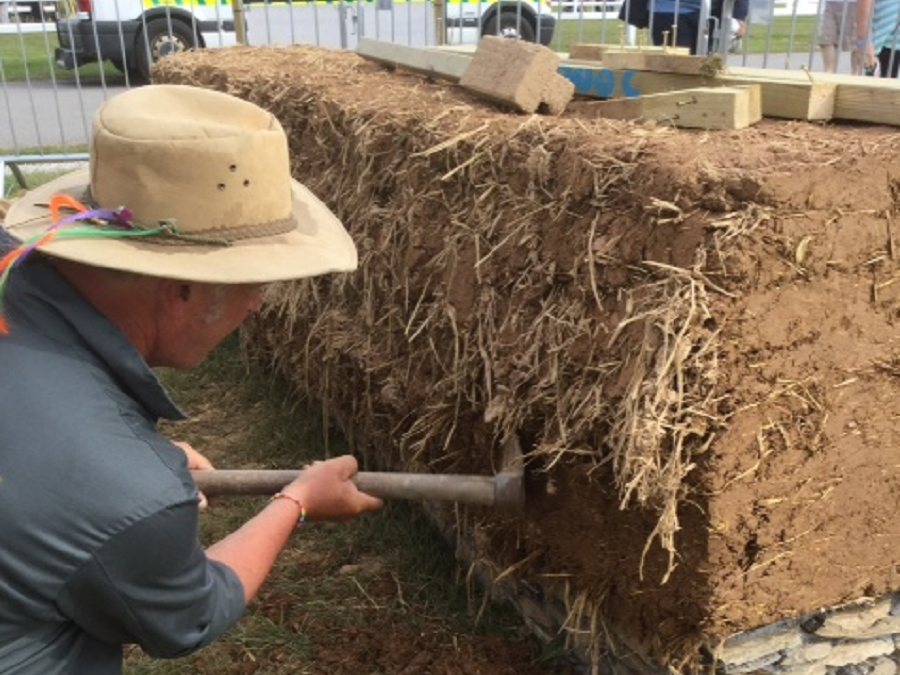 Now, every good Cob wall not only needs a solid plinth to keep it stable, but it also needs to be covered to protect it from the elements so our friendly thatcher, Christopher Robinson, came and finished the wall for us. To quote an old Devonshire saw – “Giv’un a gude hat and pair of butes an’ ‘er’l last for ever”

Overall we were really pleased with this years show and so, it seems, were the judges because we won Both Best Trade Stand in the Countryside Area (For the 3rd Year running) and the Trade Stand Competition Special Education Award all thanks to our brilliant team!

All in all, it was an excellent weekend, wonderful to meet all our visitors, we had great fun with Cobby, our Royal Cornwall Show Scarecrow, and our VIB's (Very Important Bears!) https://twitter.com/ltluchristian