What Is Cob? (A general overview) 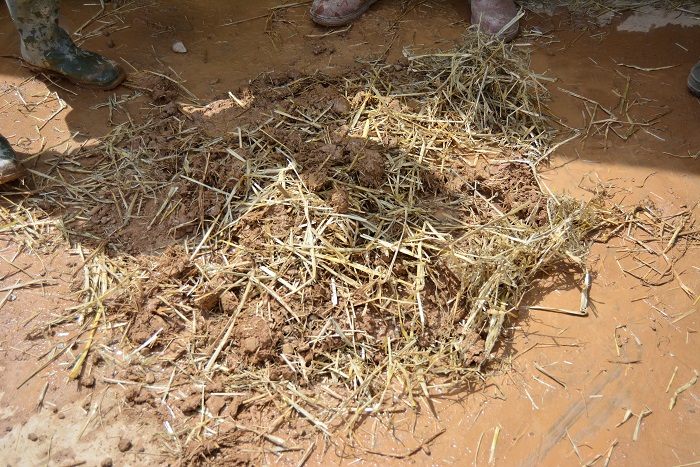 When these elements are combined correctly they form a workable building medium. 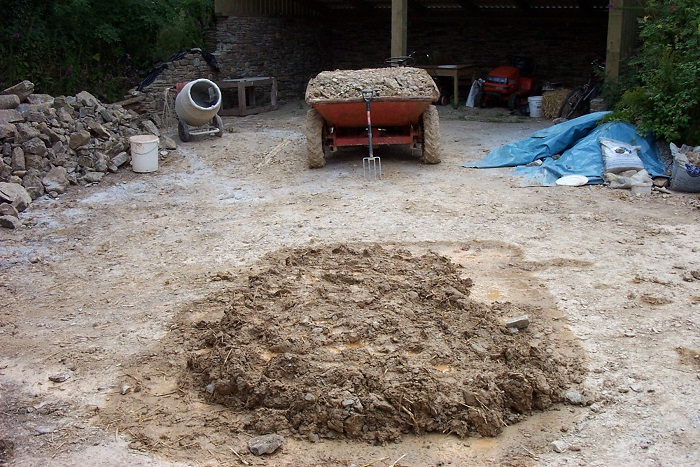 The characteristics of these elements, when successfully blended, deployed and established, will generate a homogenous material that is strong, insulative and unquestionably, sustainable. 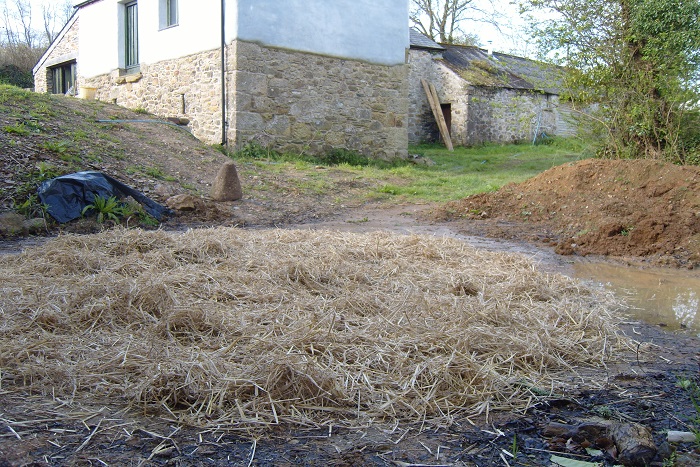 Commonly, all cob walling was/is built off of a stone plinth. 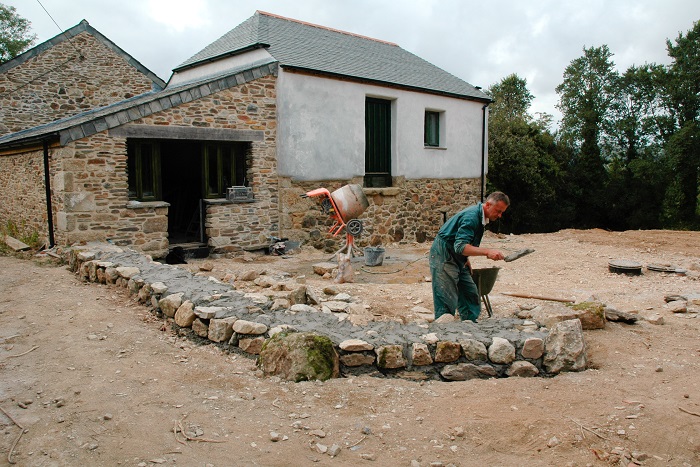 The plinth can vary in height, and tallness would have been [be] dependent on the availability and/or affordability of locally sourced stone. 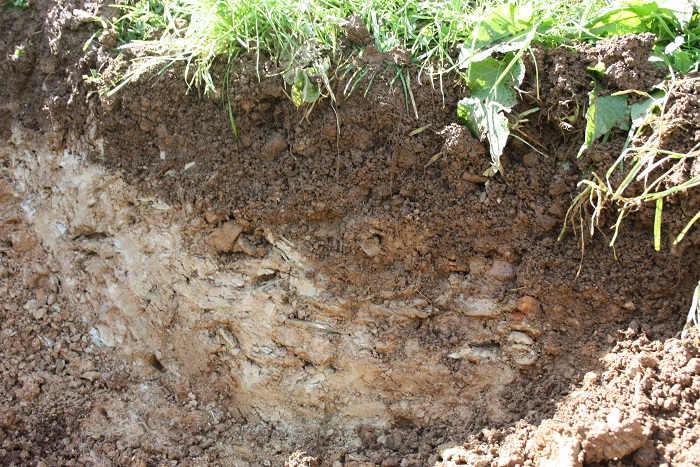 Sub-soils vary in the amount of clay contained within them. 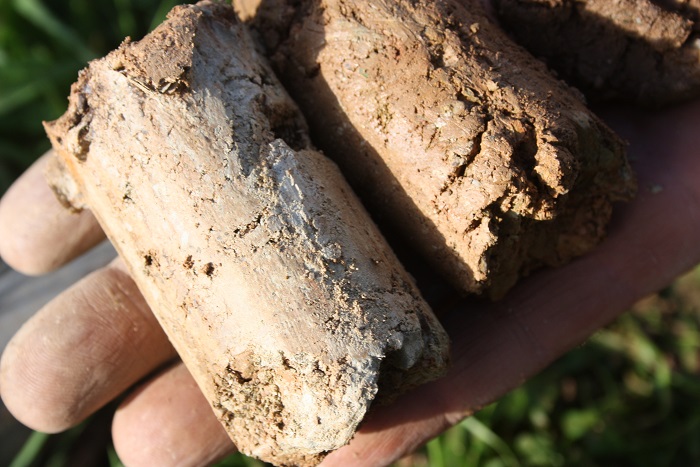 A suitable soil should consist of between 10% - 25% clay. The remainder being made up of stones, gravel, sands and silts. 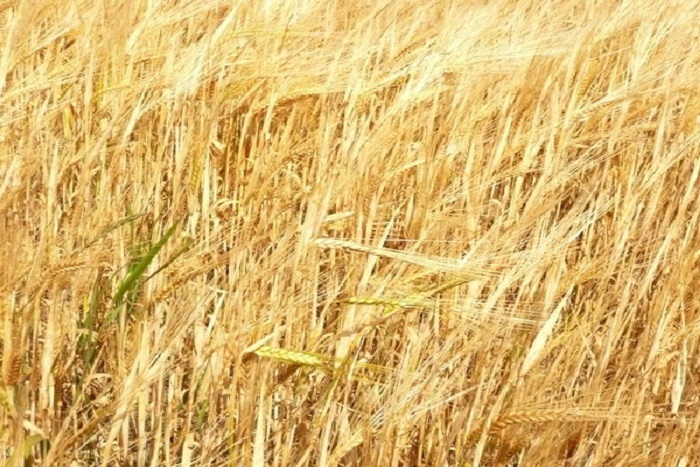 Used as a binder during the mixing process to assist manageability and to distribute shrinkage cracks through the drying process. Straw (commonly Barley) will also ensure that structural capabilities are achieved and to provide overall reinforcement of the wall mass.

An essential ingredient at the mixing stage to achieve a pliable and workable consistency.

There are several methods of mixing, fundamentally however, all cob should be mixed by compaction.

Mixing by rotation (i.e. a conventional cement mixer) will not achieve a satisfactory amalgamation of ingredients and/or realise the necessary distribution of clay. 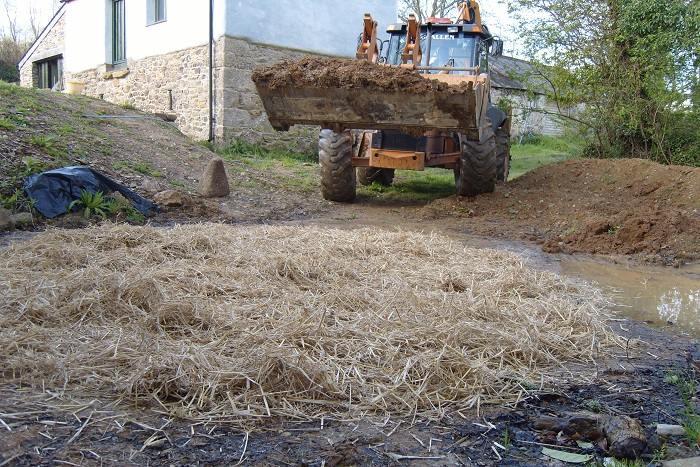 Straw must be ‘teased’ onto the mixing area and not distributed in clumps, regardless of how mixing is undertaken, whether mechanically or manually, clumps of straw will not separate. The introduction of clumps of straw [to the construction] can lead to weak points within the walling and/or generate unwelcome hollows (notably to the elevation surfacing/s). 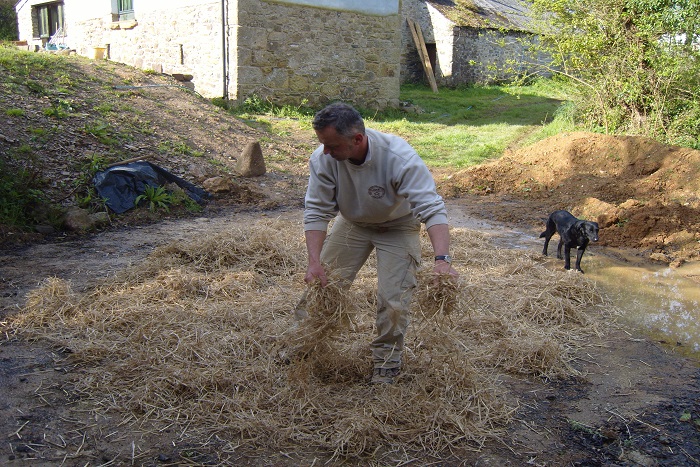 With the straw now suitably scattered, further wetting-down is required. 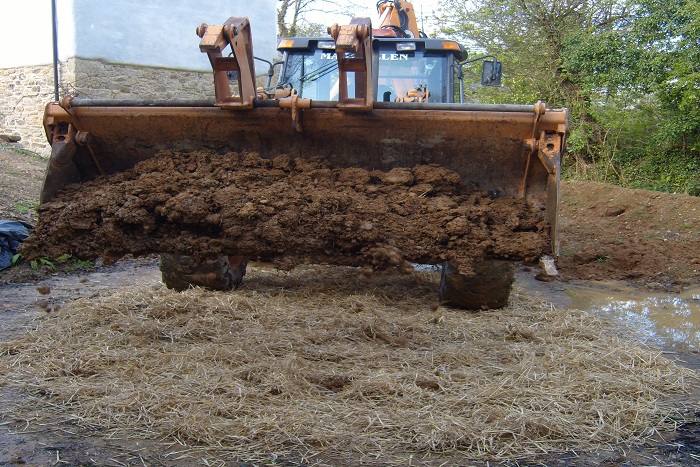 Sub-soil can now be distributed atop of the straw. Large stones, usually 50mm or more should be removed from the soil. There are several reasons why larger stones should not be incorporated into the wall construction;

The soil layer can now be thoroughly wetted-down. 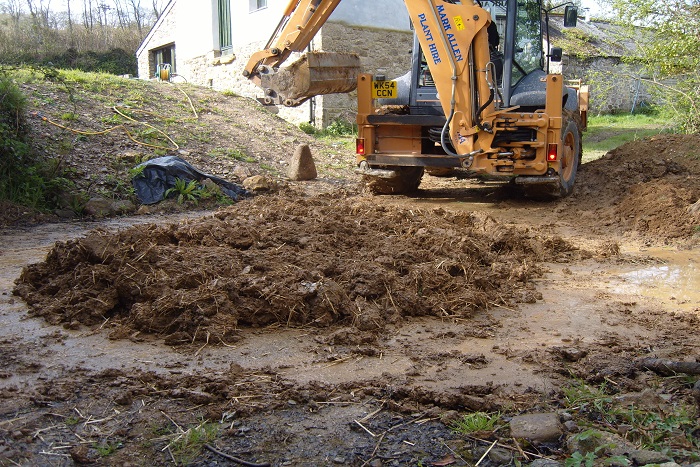 Note; when wetting is required, during any stage of the process, good practice is to ensure the peripheral area of the mixing vicinity remains wet.

Generally, most agricultural or construction plant vehicles can be used for mixing purposes. A swivel- bucket attachment (preferably with a grading-bucket) is decidedly advantageous.

Chiefly, the bigger the tyres the better! Steel-Tracked machines work equally well, however, caution must be observed when tracking back and forth (particularly on concrete surfaces) because underlying straw can be easily ruptured, thereby nullifying its primary function.

Driving [or tracking] backwards and forwards across the mixture will ensure adequate compaction of the soil and straw. More water may need to be added at this stage and can be administered locally (where appropriate) whilst the vehicle is in motion. As the mixture diffuses and spreads, maintaining a wet periphery is requisite to achieving a uniform distribution of water.

Several passes over the cob will be necessary.

Once sufficiently compacted with the first stage of tracking, the grading-bucket can now ‘drag’ the cob towards the middle, in a folding motion, to form a heap or mound.

The pile of cob can now be ‘pushed’ and ‘graded’ outwards.

Further tracking and folding will be required. 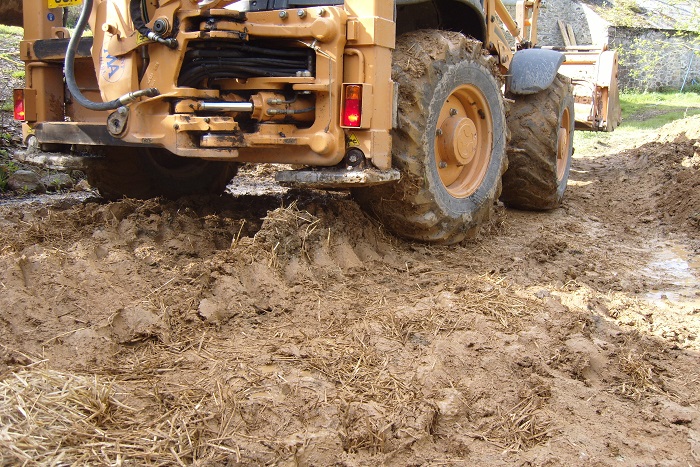 When satisfied that the cob is mixed and constitutes an integrated, bonded mass, it can be ‘picked-up’ and stored…..ideally under a breathable covering (hessian is reliable) yet not susceptible and/or exposed to rainfall…..for the next days’ use. 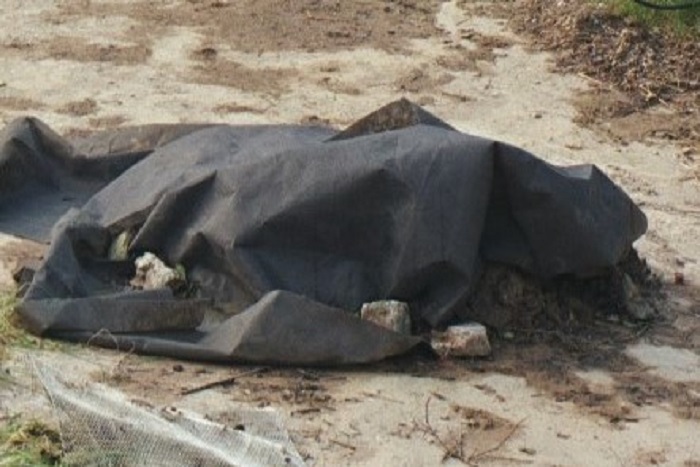 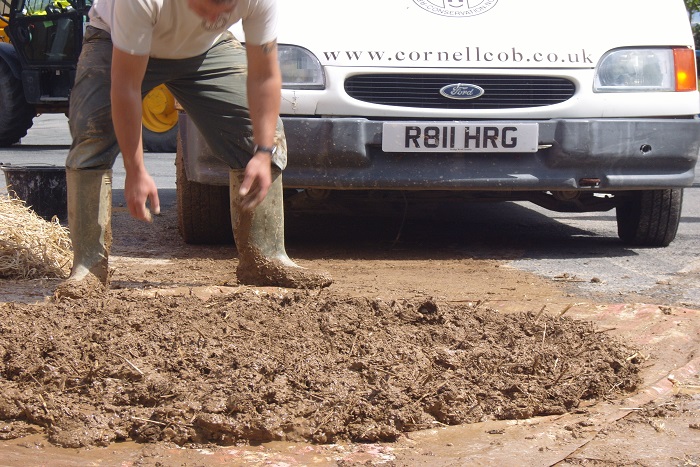 Similar to mechanical mixing sequences, soil is distributed and circulated between two layers of straw on wetted surfacing. 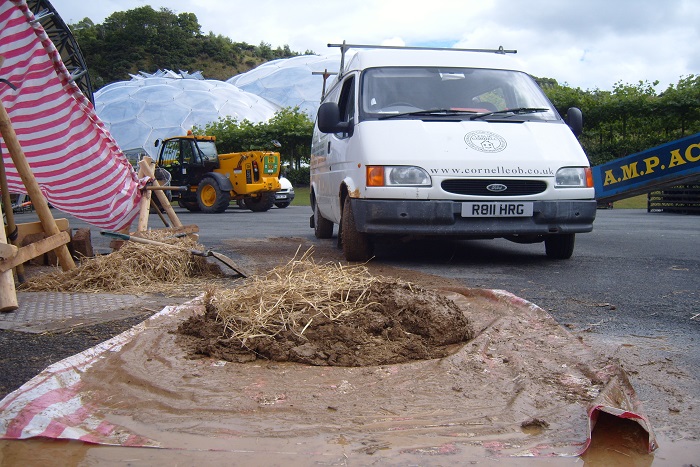 However, with a reduced volume of cob needed, compaction can be achieved by trampling or treading the mix. With sturdy boots, ‘heeling’ the cob, 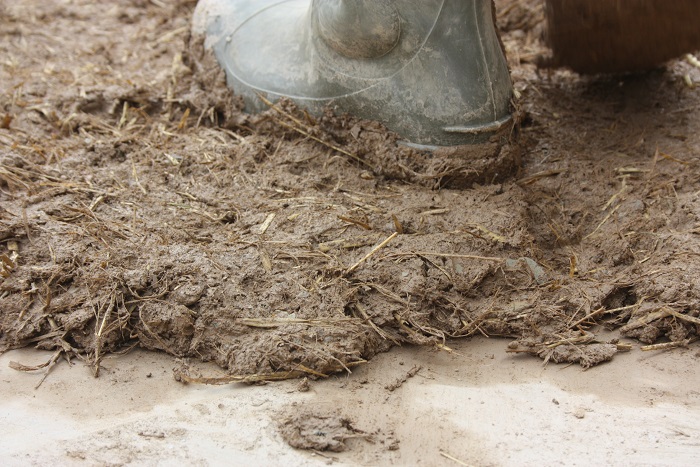 despite being rather tiring, will achieve the same results. Folding the cob can be achieved using either a garden fork or spade. Allowing the cob to ‘stand’ still applies. 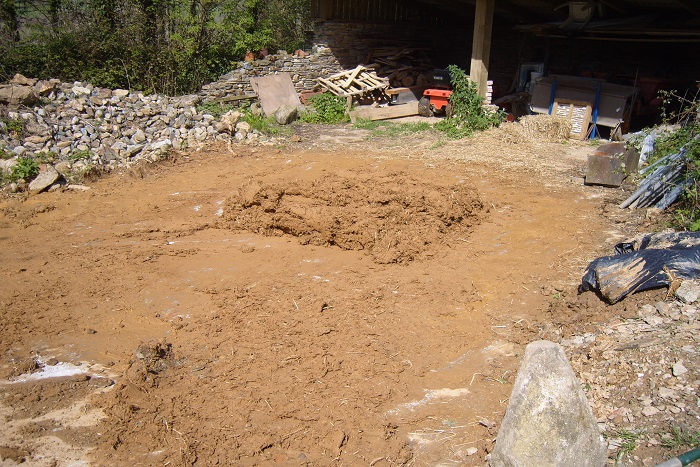 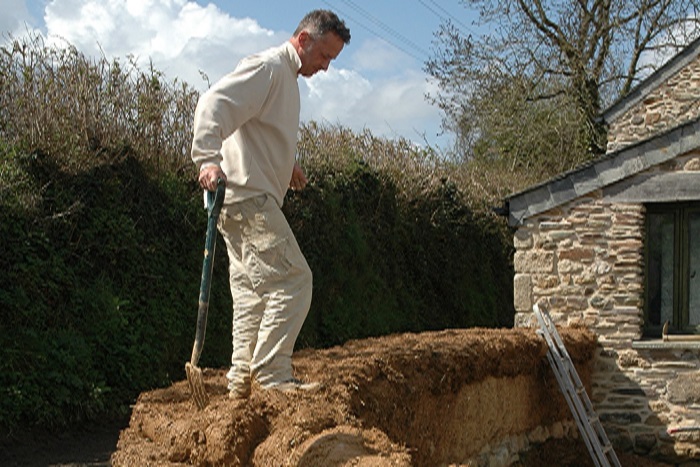 Dependent on the overall length of the wall to be constructed, several ‘layers’ of cob (approx. 100mm – 150mm) can be applied, 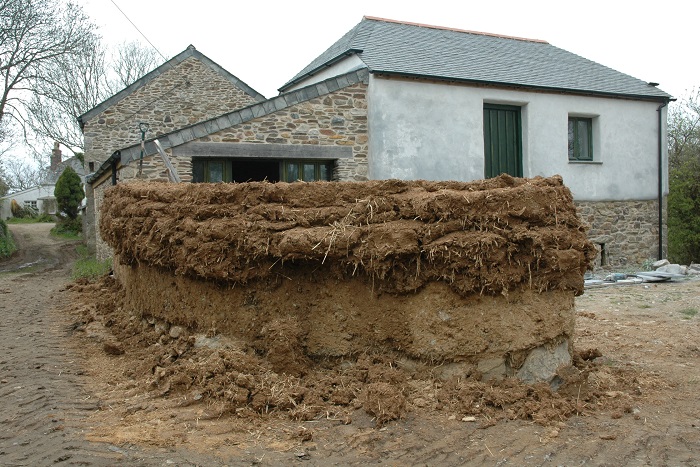 frequently achieving an end-of-day height of 500mm (or more). 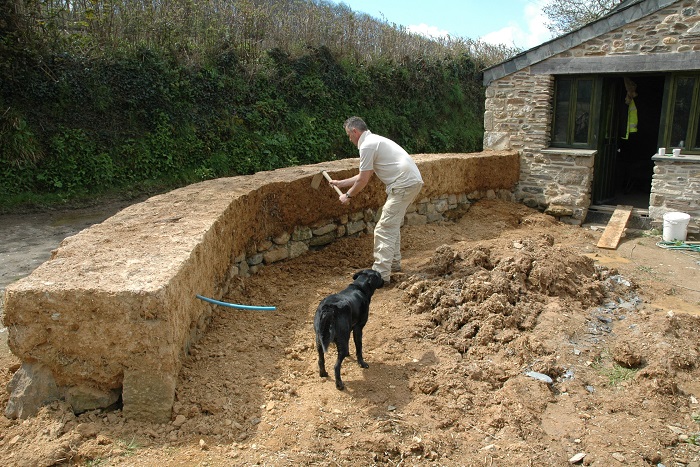 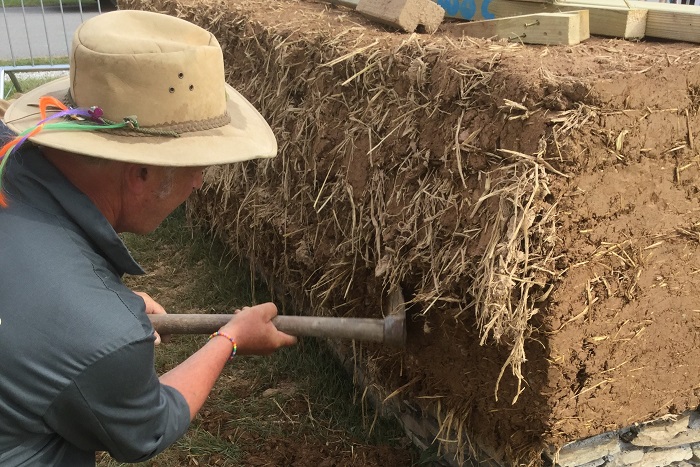