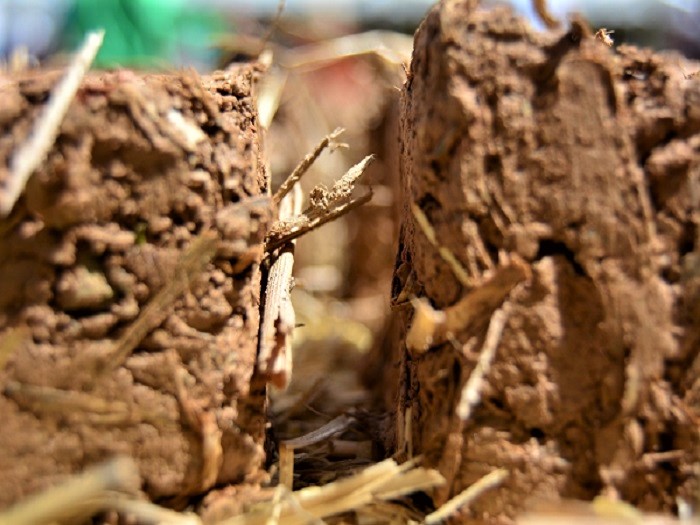 Cob, a small horse? A male Swan? A small loaf or roll?

Yes, Cob is all of those things and it is also an ancient sustainable, durable and tough building material made from a mixture of subsoil, straw and water.

If cob is mixed well and used correctly, it can last hundreds of years and if cared for in the right way it can look as good, if not better, today as it did the day it was built.

It is unclear when the use of cob was first introduced into the UK, however, there is evidence that it could have been as early as the 13th Century, however, it is likely that some of the earliest cob structures have long since collapsed as they would not have been built on a suitable stone plinth allowing damp penetration and eventual collapse. Certainly by the 15th Century it was being widely used and stayed that way until the late 1800 when block and brick became popular.

Cob was particularly common in the South West of England and in Wales where the subsoil is particularly clay-based. Cob was, and still is, traditionally made with a good subsoil, straw and water and would have been mixed by trampling – either people or animals. In fact, it was thought that an essential ingredient was manure as the cob ingredients were often distributed around a large pen or yard and the cattle would compress it as they moved around. It has been proven, however, that this is not the case. A good quality clay-based subsoil, barley straw – stronger than hay straw, and a good dampening with water is all that is needed to create a material that can be compared, in strength, to today’s concrete. 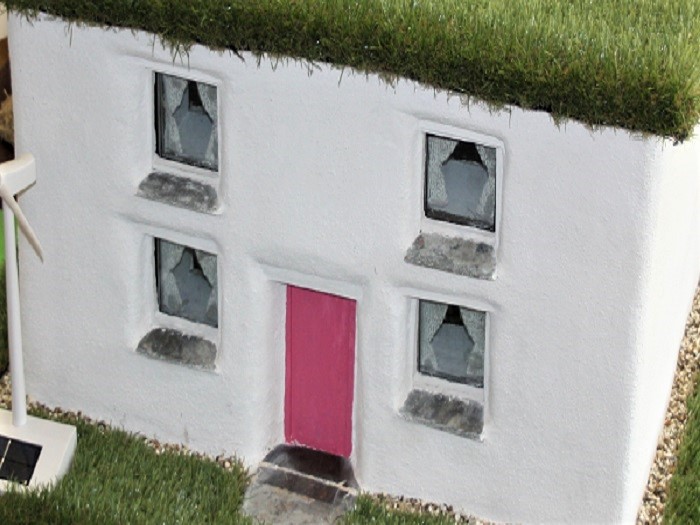 Historically, due to the very accessible nature of cob as a building material, hay, reeds, pine needles, and wheat straw were used, it was tradition to use whatever was available locally. It was considered the ‘poor-mans’ building material as it used whatever was available around the area of the build. (That is not necessarily true as Sir Walter Raleigh’s childhood home, a manor house in Hayes Barton, is constructed of cob). Still today, it is preferable, especially when making repairs to a cob structure, that the soil be harvested from the local area to ensure it matches as well as possible.

Today, if the cob is required in a large quantity, it will be mixed using mechanical assistance. The soil, straw and water are distributed on a hard surface and a tractor or digger is driven back and forth over the ingredients. The bigger the wheels are the better. Cob is only successful when mixed by compaction, the bucket on the vehicle is used to ‘turn or ‘fold’ the mixture and then is ultimately used to pick it up and take it to the structure. Saves a great deal of time. Small amounts of cob can still be trampled by human feet and used just as effectively for repairs. 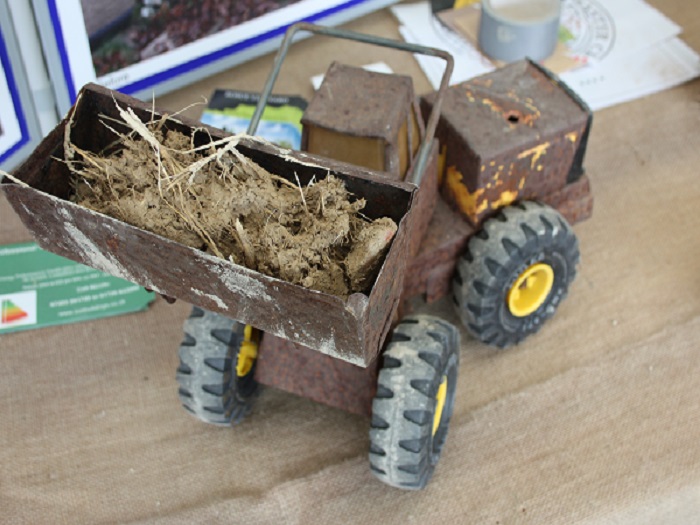 The cob structure is built onto a stone plinth, or base. This raises the cob off the ground and ensures that dampness is unable to penetrate. 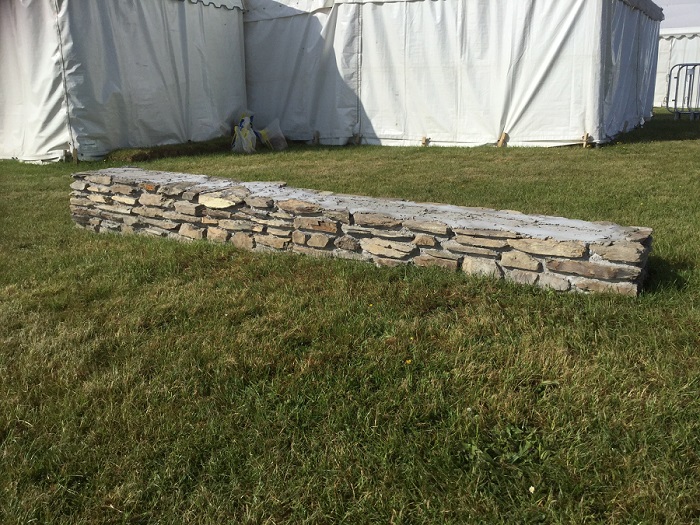 The cob is mixed and forked onto the plinth in layers that are trampled by foot to form a tight, compacted bond. 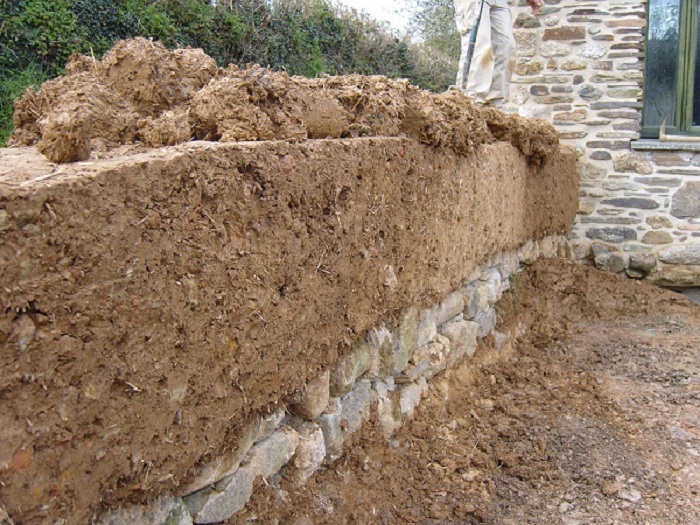 The following day, the cob is pared back using a tool called an Adze. A flat bladed axe-like tool. The spoil is then re-mixed in with that day’s cob mixture for use the following day. 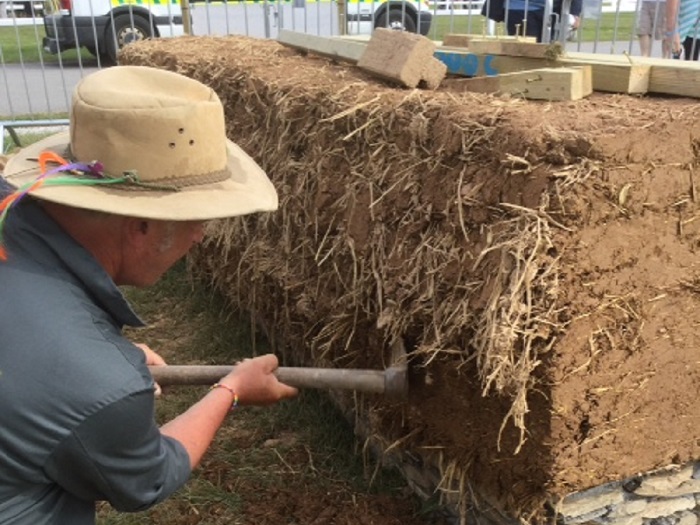 Once the structure has reached the required height it needs to be topped off. To quote an old Devonshire Saw on Cob “Giv’un a gude hat and pair of butes an’ ‘er’l last for ever” In the case of a wall, a boundary wall for example, this would most likely be a wooden formed slate tiled roof like this: 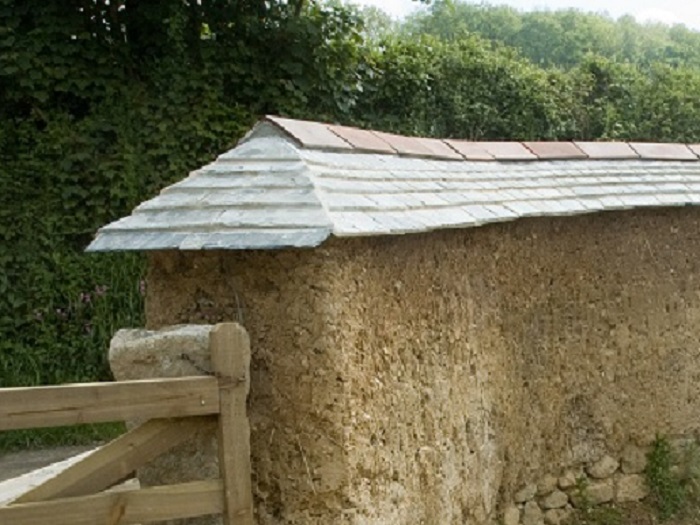 Or finished, if the cob was being used for a building it would be finished with a roof that had quite a significant overhang. This was to prevent the cob getting very wet. Cob can withstand some moisture, up to a couple of inches, but it is best to protect it from deep penetrating water ingress. This is why the walls of many cob structures are 3’ deep or wider. Historically most self-builders used thatch as again it was another readily sourced material and relatively easy to install.

To make a window, a lintel was embedded into the cob during construction and then a hole cut out underneath at a later stage to make a window. Oftentimes the window was never cut out due to financial constraints and the notorious ‘Window Tax’ of the 1700’s. We have discovered oak lintels buried in the wall in three separate projects supporting the theory that the luxury of a window was not always possible. And sometimes a window was added after the abolition of the window tax with no lintel at all! 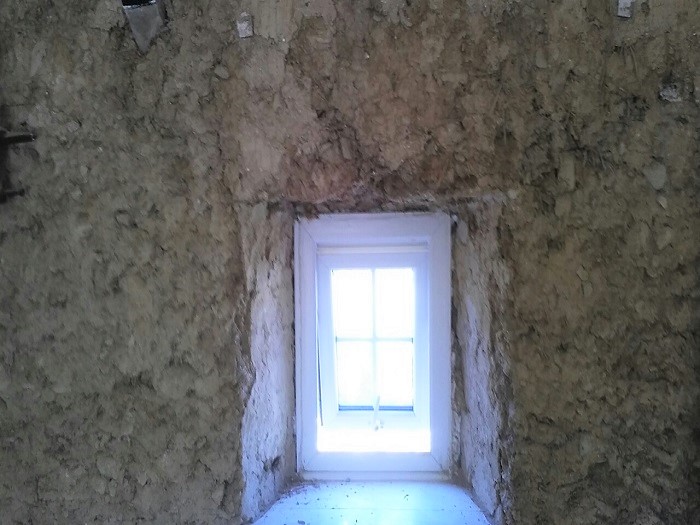 When you realise the time and effort it takes to build a cob wall it makes you realise what many old cottages are so small and why the walls are so thick and oftentimes, the windows are not quite level and very small to boot.